The 82 Chibok Girls To Reunite With Parents Next Week - FG


Eighty-two Chibok schoolgirls who were released after being held for more than three years by Boko Haram will be reunited with their parents next week, according to Nigeria’s minister for women. 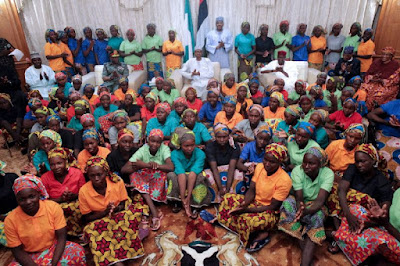 Aisha Alhassan said the students’ parents will travel from the remote northeastern town in Borno state to meet their daughters in the capital, Abuja.

“Any parents that identified their children will be brought next week to see them,” she told AFP at the staff quarters of the Department of State Services.

The 82 have been staying at the domestic intelligence agency facility on the outskirts of the city since their release in a prisoner swap deal on Saturday after months of negotiations.


The women’s minister said the recently-released 82 would be reunited at another facility in the capital with 24 of their classmates who were released or found last year.

They will receive “psycho-social therapy” and “vocational training” to help them reintegrate into society.

Campaign groups and families have criticised the government for keeping the previously released girls away from their parents but Alhassan said they were free to come and go from the centre.

Most chose to stay in the capital, she added.

The government’s goal is to have all the girls back in school at the start of the new academic year, she added, without specifying where.

“I believe from now to September, these other ones (the recently released 82 girls) would have stabilised and we will be able to ‎take all of them back to school in September.”