At Least 25 Dead After Wall Collapses At Wedding Reception


At least 25 people have died and dozens more are injured after a wall collapsed at a wedding in India. The wedding guests were in the midst of the celebrations, having dinner and mingling on the outdoor lawns when a strong dust storm blew into the area on Wednesday night. This forced the guests outside to go back indoors.

Soon after they went inside, the wall collapsed on them, killing guests, 4 of whom were children. The Times of India reported that 25 people lost their lives in the collapse which happened in Bharatpur, a district in Rajasthan state, while other news outlets counted 22 and 26 deaths. 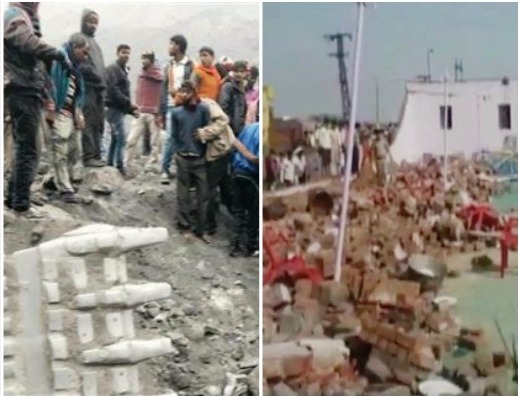 "As per the official figures, 23 people including 11 men, eight women and four children were killed. The number of injured stands at 28," Alok Vashishth, the inspector general of police, told the Times.

The newspaper reported that two more people died in the early hours of Thursday as a result of their injuries.

"The building collapsed due to dust storm and people were stuck in debris. Some locals intimated about the incident and a rescue team rushed to the spot," Mr Vashishth, the inspector general of police, told the Times.

A power outage reportedly hampered rescue work. However, the injured were eventually rescued and rushed to the hospital and treatment was administered.  It has not been revealed if the bride and groom survived.