See Photo Of Husband And Wife Arrested For Armed Robbery


Officers of Federal Special Anti-Robbery Squad (FSARS) in Ogun State, have arrested one Mathew Abioro and his wife, Precious, for reportedly engaging in armed robbery and serving as receivers of stolen items.
News Telegraph reeports that the state Police Public Relations Officer (PPRO), Abimbola Oyeyemi, revealed that the robbery gang had planned to carry out an operation before meeting their waterloo, adding the couple had confessed to the crime. 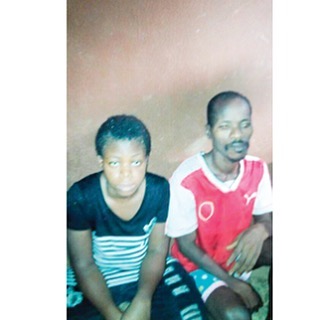 He said: “The couple were arrested when men of FSARS received information that some notorious armed robbers who have been terrorising Abeokuta and Sango axis are planning to carry out another operation consequent upon which their hideout was stormed and the couple was arrested.
On interrogation, they confessed being involved in a series of armed robbery within and outside Abeokuta metropolis. They equally confessed being receivers of stolen motorcycles from other robbery gangs and that they used to sell such motorcycles to Benin Republic and used the proceeds to purchase arms and ammunition which they use for their own operations.”