A Customs officer, identified simply as Samuel, has been arrested by the Lagos State Police Command for allegedly raping and videotaping the nudity of his female friend.

It was gathered that 29-year-old Samuel always threatened to post the clip on the social media whenever he demanded to have sex with her and she refused.

PUNCH Metro reports that the duo had met on an online dating platform, Badoo, and after establishing a mutual friendship, the Customs man invited her to his house in the Ogba area of Lagos. 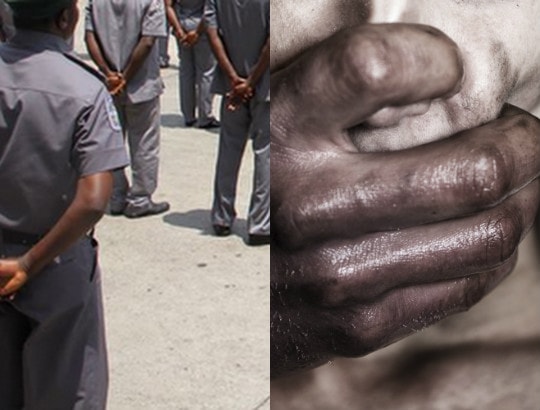 Sometime in March 2017, the 26-year-old woman was said to have visited Samuel and after entertaining her, he reportedly made love advances to her, which she allegedly rejected.

Samuel was said to have left her in the apartment, locked the door from outside and went out.

A police source disclosed that Samuel returned home seven hours later when the woman had almost
become unconscious, raped her and took a video of her nakedness.

It was learnt that the case was reported to policemen who arrested the suspect on Sunday.

The source said,
“The suspect is a Customs officer. He and the victim met on Badoo and he asked her to visit him. She honoured the invitation, unknown to her that he had a hidden agenda.“He shut her inside and went out. The woman said she called for help to no avail. He returned home seven hours after and met her semi-conscious. Probably, he had put sedatives into a drink he used to entertain her.“He removed her clothes, raped her and videoed her nakedness. Thereafter, whenever he called her to come to his house and she refused, he would threaten to put the video on the social media and out of fear, she would yield to his request.“At a point, she declined an invitation to his house and dared him. He sent the video to her relative to show that he meant his threat. The relative and the victim later reported the case to the police, leading to his arrest.”Punch reports that the suspect had been transferred to the Sexual and Domestic Violence Unit of the command headquarters in Ikeja for further investigation.

In a briefing on Wednesday at the headquarters, the state Commissioner of Police, Fatai Owoseni, confirmed the incident.

The CP, however, did not disclose the full name and other details of the suspect, saying that the public would be properly briefed after the conclusion of investigations. He said,
“The Customs officer has been arrested for the offence and he is being investigated. We assure members of the public that the case will not be swept under the carpet.”