Recovered Corpse Not My Son – Mother Of Drowned Doctor


The mother of the medical doctor who jumped into the Lagos Lagoon on Sunday has denied that the body recovered today by marine policemen in the Lagoon was that of her son.

Emergency officials from the Lagos State Emergency Management Agency (LASEMA) disclosed that five family members invited to inspect the body at the Marine Police Unit said it was that of another person. 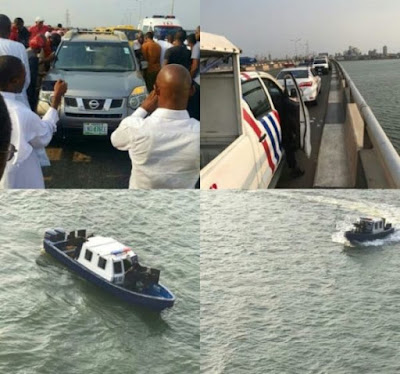 Also corroborating this, spokesperson of the Zone 2 Police Command SP Dolapo Badmos said:
“The mother has come to identify the body recovered, but she said the corpse was not her son.”Following this revelation LASEMA said the search for the doctor continues.

The Police had earlier confirmed that a body suspected to be that of the drowned medical doctor,
Allwell Oji has been recovered.
“We cannot say if it is his body because we don’t have a picture of him. He was found exactly 10:30am and we have contacted his family to come and identify if he is the one. The body was found in Onikan,” said the Police source.Dr Allwell Oji, who jumped into the Lagos lagoon, from the from 3rd mainland bridge, on Sunday, it was learnt, had attempted suicide a number of times.

He had tried jumping down from the family’s two-storey building 4 years ago, but was saved by neighbours.
“Four years ago, he attempted to kill himself and, thereafter, had tried doing so on a number of times, since then, his family had been monitoring him.”We don’t know the kind of sickness he was suffering from, but we knew he was being monitored. That was why he was assigned a driver to take him around,” a neighbor said.