Centenarian Ruby Snowling gets a helping hands from the girls in her family - all five generations of them.

The 100-year-old’s family is believed to be only the second in the UK to have six generations alive at the same time. 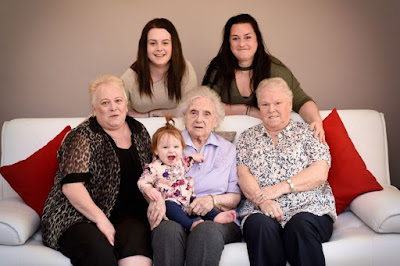 Sprightly Ruby had eight children with her husband Russell before he died aged 72 in 1979.


The hard-working pensioner now lives with her son Albert, 81, in Attleborough, Norfolk.

Her daughter is Sandra Smith, 60, who lives with her husband Derek in Worlingworth, Suffolk.

The couple have two children, including 40-year-old Samantha, who lives with daughter Porche in Norwich.

Porche gave birth to Meiche, the sixth generation of the family, in February last year.

Customer services manager Sandra said: “Luckily for us we have old age running in our family. 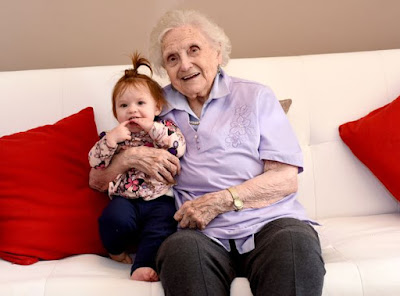 “She is fantastic for her age and still has all her faculties.

“Being honest and straight with everyone and hard working is the key to a long life.

“We have all been brought up with good morals and that is what makes a difference.

“My nan was a hard worker and so was my mum - and my children have also worked hard.


“The last time we all got together was when we had just five generations.

“It was my parents’ 50th wedding anniversary, just over ten years ago.”

Meiche had a tricky start to life after having to be born by emergency caesarean , weighing just 5lbs.

She said: “She had problems swallowing around two weeks after she returned home from hospital and turned blue.

“My daughter Samantha saved her life by doing first aid on her to get her breathing again and she had to stay in hospital for another week.


“But she is doing fine now and she is walking already. She is a bonny little thing.”

The world-record for the highest number of living generations in the same family is seven.

It was achieved in 1989 by a family in America.