"Be Careful On Instagram" - Cristiano Ronaldo Warns His Girlfriend, See What Happened


Real Madrid star Cristiano Ronaldo warned his girlfriend Georgina Rodriguez to be careful after she shared a photo of herself and a male friend.

Ronaldo’s relationship with Rodriguez was made public in November 2016 when the couple was pictured together on a trip to Disneyland Paris.

Rodriguez recently shared a photo on Instagram of herself with a male friend, Alvaro Callado who is also her former colleague at Gucci.

Hundreds of fans tagged Ronaldo in the 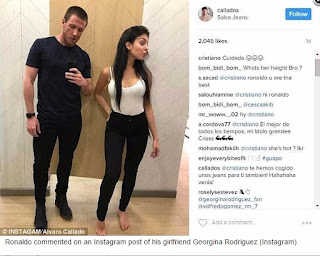 It seems the reigning Ballon d’Or holder was just joking as he accompanied the comment with three laughing emojis.

Rodriguez the male friend Callado use to work together at Gucci before the beauty lost her job there due to the attention she was receiving as the girlfriend of the most popular football star in the word.

According to El Espanol, paparazzi cameras were stationed in front of the Gucci boutique in the heart of Madrid where Georgina worked which made her lose her job.