In a manner that recalls the devilish excesses of the biblical Jezebel, a 24-year-old Jacinta Ewa Omiko, allegedly murdered her pregnant co-tenant, Ginika Gabriel, because the victim’s child defecated on the ground.

The evil act happened in the compound where they reside at Akpoh, a village in Afikpo North Local Government Ebonyi State, following an altercation. 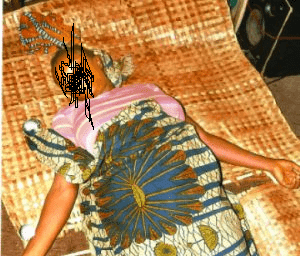 Omiko was alleged to have hit Gabriel on the head with a kitchen stool and she slumped. She died within minutes following the failure of efforts by neighbours to revive her. Her body was

On the fateful day, Omiko had a hot exchange of words over the fact that the little child of Gabriel defecated on ground in the passage of the house where they live.

At the headquarters of the Ebonyi Police Command where she is being held while investigation progresses, the suspect, Omiko, told Sunday Sun in an interview:
“What happened was that I asked my neighbour, Gabriel, to clear the feaces of her son on the floor of the passage, to avoid people stepping on it. She ignored me and we began exchanging words. Then a fight ensued and I pushed her down.”In the course of the fight, Omiko allegedly hit Gabriel with the kitchen stool.

Shedding light on the incident, one of the neighbours of the duo, Gabriel Uro said:
“I was harvesting my yam in the farm when I heard that Omiko and Gabriel fought in the compound. I also heard that Gabriel died on the spot. So, I went immediately to report the case at the Afikpo North Police Station and Omiko was arrested. The case was then transferred to the State Criminal Investigation Department (SCID) as Sunday Sun gathered from Mrs Tina Ogbodo, the Assistant Commissioner of Police in charge of the State Criminal Investigation Department, who also disclosed that detectives had recovered the kitchen stool allegedly used by Omiko to hit Gabriel.

Ogbodo added that the command was still awaiting the autopsy done on the deceased.

Meanwhile, the family of Gabriel has made a passionate appeal to the police to do diligent investigation and also prosecute the case properly.
“We want justice to be done. Our late sister Ginika Gabriel was a quiet woman. We cannot understand why someone should kill her just like that because her child defecated on the ground. We want justice to be done. We believe God will fight for us and God will take care of the children she left behind,” a member of the family said.In apparent response to the desire of the family, Lamorde assured that the suspect would soon be charged to court.

Welcome to a new week of Comedy with SIRBALO and Ben Cash. They titled this one BRIDE PRICE - MAMA AND PAPA ( EPISODE 15 ). watch and enjoy... SirBalo ...

Anuel AA Somo o No Somos Anuel AA brings us this hot astonishing new song titled “Somo o No Somos” and we uploaded it here for your free streaming and ...