Ifeanyichukwu Ejeh, a 16-year-old secondary school boy, who lives with his family in in Ndiogodo Idoko village, Ishieke community of Ebonyi Local Government Area of Ebonyi State, has been arrested for killing his father. 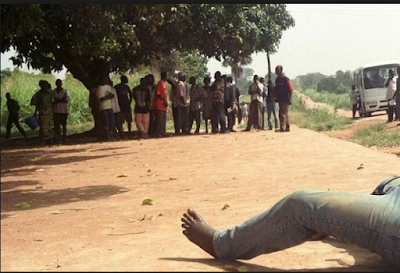 The SS2 student of Community Secondary School, Mbeke in the area, who had a misunderstanding with his father, over  N1,000 money given to him to buy things and cook for the family but which he used to settle financial requirements in his school instead, clubbed his father to death with a pestle while he was sleeping.


News Telegraph reported that Ifeanyi, who was arraigned before an Abakaliki Magistrate court, pleaded for mercy and blamed it all on a spirit.
According to him, he was reading his book in their compound when something suddenly came over him and asked him to kill his father. He went on to say he regained his senses after he committed the said act.

But wife of the deceased, Mrs Mary Ejeh a Cross River-based business woman, who admitted she was not around when the incident occurred, said the deceased had given N1, 000 to the suspect for cooking but he used it for his school expenses which annoyed the father, leading to a heated argument between the deceased and his son.