A 46-year-old commercial bus driver identified as Onyiyechi Edum is currently in police net for defiling and impregnating his 14-year-old step daughter. 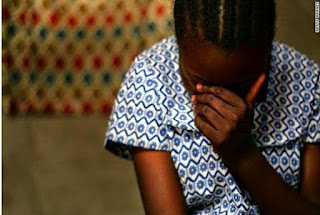 File photoEdum, who is a native of Abua in Abua/Odual Local Government Area of Rivers State, became more involved in sleeping with the girl who calls her Daddy when his wife took ill and was hospitalised for over three months

While the randy man was pretending to sympathise with his sick wife, he was sleeping with her daughter (name withheld) who is currently in JSS in one of the secondary schools
in the area.

The suspect, who is currently at the Police Division in Rumuolumeni, Port Harcourt, committed the crime at his residence in Ibodaya in Rumuolumeni.

Speaking on Friday on why he was arrested by the police, Edum told Southern City News that he was drunk when he slept with his step daughter on different occasions, even when he had earlier told their correspondent that he only had carnal knowledge of the girl once.

According to him,
“The police arrested me because they said I impregnated my step daughter. I don’t really know who impregnated her, but I slept with her only one day.“She is 14 years old. I slept with her when her mother was in the hospital. Her mother is my wife. The mother was in the hospital for three months and some days.“It was in December that I slept with her. We went to the hospital on October 6, 2015. I slept with her on December 25. After that, I also slept with her on January 3, 2016.Edum, however, said he should be blamed for his actions, stressing that too much drinking of alcohol led him to the act.
“I was driving, but when my wife gave birth and had health challenge, I sold the bus. I am not doing anything for now. I don’t know how this pregnancy came about because it has taken a long time I had sex with her,” he said.Speaking on the matter, the Divisional Police Officer, Mr. Kingsley Chukwueggu, called on mothers to always look after their children.

Chukwueggu also advised mothers to take protective actions when they suspect their husbands’ behaviour towards their female children.

He, however, stated that the suspect would soon be charged to court for his actions, adding that the law does not condone the defiling and impregnating a minor.