Lady Recounts How Man, Pictured, Forced Her To Drink His Semen


A 25-year-old lady has revealed how a man, Mr. Enyeribe Nwokocha, allegedly forced her into prostitution and also made her his sex slave since she was 17-year-old. 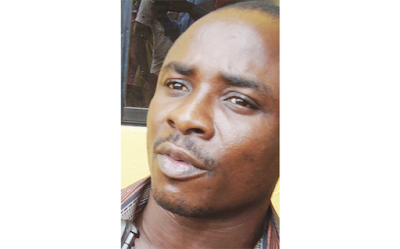 The lady, who argued that she was strongly under a spell cast on her by Nwokocha, said that aside from compelling her to have sex with other men for money, he also forced her to drink his semen after having sex with her.

According to her, she fell into the clutches of Nwokocha when she was in secondary school and soon
lost her senses. She claimed to have jettisoned school and forgot her family.

NewTelegraphonline reports she said:
“He said that if I allowed any man to have sex with me without condom, I would die! He said, he alone, had the right to have sex with me without condom. He said that any day I divulged what took place between us, I would die.”The Abia State Commissioner of Police, Mr. Leye Oyebade said:
“Nwokocha, who resides at 24 Nkume Street Aba, was arrested on January 20, by policemen attached to Ndiegoro for abducting his victim. Nwokocha, sometimes in 2010, abducted the victim from Awo Idemili in Orsu Local Government Area of Imo State.The suspect with others at large dispossessed the victim of her belongings and subjected her to prostitution in different hotels all over the country.They collected the proceed for their personal use. The victim was said to have fallen into the trap of Nwokocha while travelling from Lagos State to Bayelsa State. When she got to Yenagoa, the state capital, it was late. She boarded a taxi, unaware the driver and passengers were abductors.

She became alarmed, when the cab diverted into a bush. Sensing danger, she started screaming for help. It was at that point, that one the passengers, Nwokocha, told her not to be scared, that he would help. He promised that nothing would happen to her.
The victim narrated:
“He told me that God sent him to come and use me for a missionary work. He reassured me he came to assist me; he said I shouldn’t cry or be afraid. He also told me that he was led by God to tell me that I had the gift of prophecy, which I should use to serve God. He said I was going to make money.He said he would keep the money for me and use it to open a church for me. He brought out N1000 from his wallet and made me take an oath that whatever I did with him, would remain a secret between us.”The lady further narrated:
“He told me that any money I got would be kept for me in a special account. He said he was a foreigner, not a Nigerian. I was forced to take an oath with him in that taxi. After the incident, he allowed me to go to my sister’s house that night, but I couldn’t tell my sister what happened because of the oath.
He warned that anytime I divulged the incident to anyone, I would vomit blood and die. I repeated the same pronouncement on him.” According to her, when her sister relocated to Lagos, leaving her to mind her shop, Nwokocha suddenly had unfettered access to her.

He allegedly ordered her to start attending clubs and to have sex with men for money. She said that all the money she made having sex with men, was handed over to Nwokocha. One day, she complained that she was sick and tired of the clubs, she wanted to quit.

But Nwokocha allegedly started taking her to hotels himself, where he arranged for men to have sex with her. She said: “When the clubs became too challenging for me, I told him I couldn’t continue because I might get killed. It entailed going home with some of the men. He started taking me to hotels.

I was in SS2 and only 17 years when all these started. Today, I’m 25 years old. I stopped going to school and forgot that I had parents or relatives. I now know that I was under a spell. In those eight years, he was also having sex with me.” She victim insisted that she started gradually coming to her senses and became fed up with everything that was happening to her.

She got up one day and walked straight to the nearest police station, to lodge a complaint against Nwokocha. Police stepped into the human trafficking matter and asked Nwokocha to produce any money the victim had made so far from prostitution, he couldn’t. Nwokocha’s version of the story was not coordinated. He said he had known the girl before the taxi incident, and even wanted her to be his girlfriend but she refused.

He said: “She said I was short and dark complexioned. She said she wanted to marry a man that is tall and fair in complexion like her.” Asked if he ever coerced the victim into taking an oath with him, he couldn’t coherently respond.