How A Soldier Beat Motorcyclist To Death In Lagos


A power-drunk soldier, identified simply as Sergeant Taiwo, has brought sorrow into the family of a 25-year-old commercial motorcyclist, Abu Alhaji, whom he allegedly beat to death. 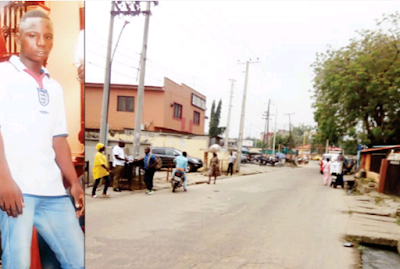 Taiwo, aka Sir T, lives  in Myyong Army Barracks, Yaba, and is reportedly in detention in the barracks.

The motorcyclist, father of a six-month-old child, was said to have taken a woman, who wanted to buy snacks, to an eatery in the Morroco, Shomolu area, while the soldier parked his Toyota Camry on the premises.


Punch learnt that Abu was waiting to take the passenger back to her destination when Taiwo, who had gone to a beer parlor opposite the eatery, came back to pick his car.

It was gathered that while Taiwo reversed his car to exit the premises, the vehicle hit the back of the victim’s motorcycle.

Punch learnt that as Abu struggled with the motorcycle, the woman arrived at the scene.

An eyewitness, Bolaji Oke, said the woman quickly hit the body of the car to alert the soldier not to run over Abu, who was still battling with the motorcycle.

“The soldier came out of his car and slapped the motorcycle rider repeatedly. As the rider tried to explain to him what actually happened, he descended on him with blows and beat him up. The passenger fled in the process. The soldier beat the rider until he could not stand on his feet; and he left in his car. As he was beating the man, he said nothing would happen if he died. Everybody present was afraid to intervene because he is a soldier. Somebody informed his younger brother, who rushed to the scene. The case was reported at the barracks and the victim was taken to the Military Hospital in Yaba around 9pm on Friday,” Oke said.
It was said that the incident was also reported at the Alade Police Station.

A resident of the area, who gave his name only as Collins, told Punch, that Taiwo was notorious for intimidating people, adding that he recently ran into trouble with a major because of his attitude.

He said, “Sometime in December, Taiwo slapped a man at the beer parlour, saying the man was staring at him. In the end, it turned out that the man was a major and he started begging him. After that encounter, he had a disagreement with one of the women, who work at the beer parlour. He tore the woman’s clothes. I think he should pay for this.”
There was disquiet at the victim’s residence in the Badulaye area of Shomolu when our correspondent visited his relatives on Wednesday. Sympathisers thronged the residence to commiserate with the family.

Distraught Abu’s elder brother, Adamu Alhaji, who lives in Kano State where the victim hailed from, said he was relaxing in a mosque after observing Ishai (8pm) prayer when Abu’s younger brother, Shuaib Alhaji, informed him on the telephone that he had been hospitalised.

“I took a night bus to Lagos. When I arrived around 11am on Saturday, I was taken to the hospital’s mortuary. Abu died at about 7am on Saturday. Shuaib travelled to Kano on Monday to look after our parents because they have been weighed down since they learnt of Abu’s death,” he added.
Adamu urged the army authorities to support the family to cater to their ageing parents and the deceased’s nursing wife, adding that the death was an irredeemable loss to the family.

He said, “Abu was hard working and generous. He sent money every month to our parents and his wife. His son is just six months old. The soldier does not deserve to be in the Nigerian Army; he should be dismissed.”
The acting Deputy Director, Army Public Relations, 81 Division, Lt. Njoka Irabor, said investigations were ongoing into the incident.

“We cannot actually say anything until investigations are concluded on the issue,” he added.

The Lagos State Police Public Relations Officer, SP Dolapo Badmos, who confirmed the story, said the command was working with the Nigerian Army to ensure the prosecution of the killer soldier.

She said, “According to the information we gathered, the man (Taiwo) was reversing his car and hit the motorcyclist. It generated crisis and he beat him up. The motorcyclist fell and was rushed to a hospital where he died. The case was reported to the police three days after the incident. The command was able to reach out to the army. We got a report that the man had been apprehended and the army wants to do the needful so that we can also follow up on the prosecution.”Source: Punch