Donald Trump has labelled singer Madonna "disgusting" after she mused out loud that she was thinking about "blowing up the White House". 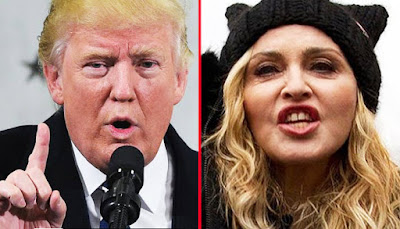 Donald spoke of his feelings about the singer in an interview with Fox's Sean Hannity on Thursday night. The President said:
"Honestly, she's disgusting. I think she hurt herself very badly. I think she hurt that whole cause. I thought her and a couple of others. But I thought she was in particular, I thought
what she said was disgraceful to our country."Madonna had said on the Woman's March the day after Donald Trump's inauguration:
"I'm angry. Yes, I am outraged. Yes, I have thought an awful lot about blowing up the White House. But I know that this won't change anything.


Would @BarackObama have taken kindly to [email protected] "Yes, I have thought an awful lot about blowing up the White House" Women's March pic.twitter.com/rTJntunZPq— President Trump (@PresidentTrump_) January 21, 2017