Selena Gomez has been accused of using new beau The Weeknd. 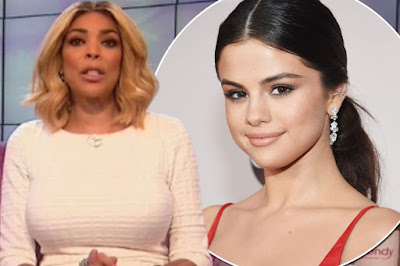 “When Selena wants to push out new music, they say she dates the stars that are going to help her along with collabos and things like that, and then when the music is out, she drops them and moves on to the next one,” Wendy said, claiming that Justin Bieber's friends have accused of her doing the same.

Wendy accused The Weeknd's latest album, Starboy, was 'lukewarm' and hinted that the new relationship arose because Selena is hugely popular on Instagram with 107 million followers on Instagram.

“What keeps you in the public eye more than a popping relationship?” a suspicious Wendy asked.

The outspoken chat show host insisted that Selena is “not a singer” and claimed that she was probably “the most manufactured” artist out.

Wendy told Selena that she only had “two more minutes” to 'network' with guys before she gets to an age when people start judging her.

Meanwhile, Selena Gomez doesn't feel guilty about her blossoming new romance with The Weeknd, according to US reports.