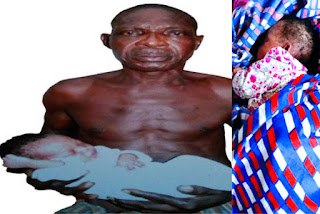 Jimoh, a divorcee, and Osin, a 35-year-old spinster, were arrested by policemen from Igbogbo Police Station, in Ikorodu area of Lagos.

A police source told Vanguard that Osin practises her trade at her 4, Kadara Street residence in Oyingbo.

It was gathered that Osin sometime, last year, assisted a 28-year-old woman, identified as Stella, to deliver a baby girl and afterwards, reportedly told the woman that the child died, and reportedly
showed Stella a dead child.

She then took the new born baby to her father, Jamiu Jimoh, in Ikorodu.

Meanwhile, while being interrogated after her arrest, Osin stated that she found the baby under a bridge near her home at Oyingbo. She said:
“On November 9, I was walking along the road in Oyingbo and found a baby on the ground. It was a female child, so I took it. That was the mistake I made. I should have gone to report to the police, but because it was a female baby, I liked her. “That was how I took the baby home to Oyingbo. But when I saw how everyone was behaving and gossiping, I had to take the baby to my father in Ikorodu. Even when I could not come to Ikorodu from Oyingbo, my father was there to take care of her. Not long after I left his place on Sunday, someone called me on phone at night, saying my father had been arrested. I am a hairdresser, but I am also a traditional birth attendant. The baby was not delivered at my place. I was not the one that helped the mother of the child deliver the baby. “But when the police heard that I was a traditional birth attendant and asked me if I assisted the baby’s mother during delivery, I said yes. But I found the baby under the bridge at Apapa Road in Oyingbo and she has been with me since November. Her father Jimoh, who resides at 4, Aro Street, Ikorodu, said he is not aware that the baby was stolen. However, he confirmed to Lateef Akinborode, Executive Director, Community Women’s Rights Foundation, CWRF, at Igbogbo, Ikorodu, that the baby was found with him.
He told Akinborode:
“Osin is not the baby’s mother. She was not pregnant. “I do not know the baby’s mother. My daughter has never brought children to me before.”

Eminem Square Dance Eminem comes through with yet another song titled “Square Dance” and we uploaded it here for your free streaming and download. Listen & Download Eminem – Square ...

Eminem - Cleanin Out My Closet

Eminem White America Eminem comes through with yet another song titled “White America” and we uploaded it here for your free streaming and download. Listen & Download Eminem – White ...