A couple who was told they were unlikely to ever have children of their own have welcomed a “reborn baby ” doll. 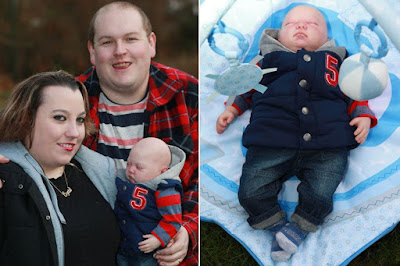 Crystal and Terry Duke feared they would never be able to have children but all that changed when they discovered 'reborn babies'.

Their baby, Baby George has a perfect mix of his parents’ looks.

Instead of being delivered in a hospital, George was delivered by a postie. Family and friends watched excitedly as he was unwrapped.

Crystal and Terry dote on the lifelike rubber tot so much they spent £250 on Christmas presents for
him and took him in his pram to meet Santa.

Seeing herself and her hubby ­reflected in his face so perfectly means the world to Crystal, who contacted the doll artist after being told it was unlikely she could ever have children.

The 24-year-old told the Sunday People:
“He looked just like the picture the artist sent us, I could see he had my eyes and Terry’s nose. George looked exactly how I always imagined my baby would.“I’d spent my adult life dreaming of being a mum, imagining what my baby would look like. When we got together in 2008 I told Terry my hopes of having a family and he said he couldn’t wait to be a dad. It was all we wanted.”Two years later the couple began trying for a baby. Nothing ­happened so in 2013 they turned to doctors.

Crystal was unprepared for the ­devastating news that came.
“My doctor explained I had a condition which meant my body didn’t make eggs. It was impossible for me to get pregnant naturally.“I was beyond devastated. Everything I had ever hoped for, my dreams of a family, were shattered. I had spent years imagining looking at my baby, seeing a perfect mix of me and Terry staring back.  I had even picked the name George, after my grandad.”Crystal slipped into a deep depression but then her doctor made an unusual suggestion.
“One day my doctor suggested I research reborn babies. She said they were very lifelike dolls you could look after as if they were real babies. I thought it sounded a bit weird. When I mentioned it to Terry he had ­reservations. We had seen someone with a reborn baby on TV and didn’t understand why they had it.”But as it seemed to be her only chance to be a mum, Crystal did some research. She discovered many women who could not have children used ­reborn babies.

However, one thing bothered Crystal – that the doll would not look like it was their child.
“I found a reborn baby artist who was able to use pictures of the parents to create a doll that looked just like them. When I read that, I got a sudden rush. I realised my dream of having a mini-me could come true.”Crystal and Terry paid £350 and sent the artist images of themselves, then waited for their baby.

Instead of a sonogram, the proud parents-to-be were sent a photo of George to cherish until he arrived.

Crystal said:
“I had spent years watching people share their scan ­pictures on Facebook and wished it was me. Now I had my very own photo of my baby while I waited to meet him.”When George arrived in October last year, Crystal and Terry, 34, held an opening ceremony at their home in Ealing, West London, sharing the ­moment with family and friends in a Facebook video.
“The moment I set eyes on George, I fell in love. He was my baby and I ­instantly felt an incredible bond with him. I became a mother.“It was hard to believe he wasn’t real. It didn’t matter that he was a reborn baby, he was my baby and I knew I’d do anything to protect him.“My friends said he had my eyes and his face is like Terry’s.
“It was just like taking a real baby to meet their family. Because we had helped design him it was almost like we had helped make him, like real parents.”Terry and Crystal are so keen to have the full experience, they do late-night bottle feeds.

She said:
“We’d set our alarm through the night to get up and make formula for George.
“It makes a crying sound. I know most parents complain about having to do midnight feeds but Terry and I had been wanting to do them for so long we enjoyed it.”The couple bought a full set of baby kit and settled into life as new parents, bathing George, dressing him, changing nappies and taking him to the park in his pram.

Crystal said:
“We took George out for a walk and a stranger stopped us. They said how beautiful he was and how much he looked like us both. I felt a swell of pride. They didn’t realise he was a reborn baby. We spoilt George. He had a new baby gym, clothes, toys and teddies. He had a Christmas Eve box with special pyjamas and a book.“We left a mince pie and carrot out for Santa and Rudolph. We took them away the next day so that George would see Father Christmas had been.
“He even went to a Santa’s Grotto. The Father Christmas understood George was reborn but he was really lovely and posed for a photo with us.”Crystal said she and Terry, a former warehouse assistant, have only had a few negative experiences so far. She said:
“There was only space for two buggies on a bus and me and another lady were there with our prams, so the bus driver told this girl she had to wait for the next one. She started shouting and saying I didn’t deserve the space because my baby was a doll.“It was horrible but I just ignored her. Now I have George I don’t care what people think. We’ve been trying to get a family portrait done but when we explain George is reborn, photographers say they won’t do it. It’s a shame. It’s not hurting anybody and to us, George is as real as any other baby.”Next year the proud parents plan to take delivery of a reborn baby sister for George – and they can’t wait to grow their family.