The 27 year old leader of a 4 man robbery gang has confessed to raping nine women in the last two weeks in Lagos with 3 of his members. 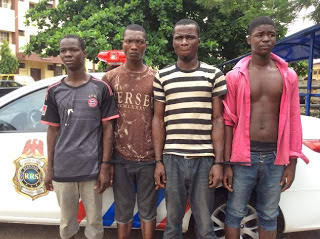 The suspect, a bus conductor in Oshodi from Akwa Ibom was arrested around 5:38 a.m. on Wednesday in company of his two gang members by the Decoy Team of the Rapid Response Squad.

The names of his gang members are Saviour Daniel (23), Daniel Olayemi (18) and Abdulwahab
Yusuph (17).

The operatives had on Tuesday evening arrested one of John’s colleagues while fighting with another group of boys over a Samsung tablet in Oshodi.

The suspect, Daniel Olayemi, a member of John’s gang, had disclosed to interrogators that he stole the tablet from a lady that was gang raped during one of their escapades in Charity Bus stop.

The revelation prompted early morning raid of Charity Bus Stop near Oshodi, where three other members of the gang were arrested.

Olayemi, in his disclosure to investigators revealed that they were four in John’s gang. He noted that in the last two weeks, the gang robbed 12 passers-by and raped no fewer than nine ladies in the bush at Charity Bus Stop.
“I have followed him to more than 12 operations. We were always operating at Charity Bus Stop from 4:00 a.m. to 5:40 a.m. Our last operation was on a lady of about 57 years old. She was passing by Charity Bus Stop. I snatched her hand bag and disappeared into the bush…. I came out of the bush to see three of my colleagues having sex with the lady. I hid the best of three phones I found in the lady’s bag. I disclosed to them that I saw two small phones and N8, 000:00 in the lady’s bag,” he stated.We had in a similar circumstance days before, raped a 42 year old lady at the same spot when we didn’t see any valuable from her bag. We took turns to rape her, then, we allowed her to go….In all the rape cases, John takes the initiative and the lead. He dragged the ladies into the bush before calling us to take our turns. He is the leader of the gang. None of us dare challenge him. He doesn’t share with us whatever we made from the robberies. That was why I stole the Samsung tablet from that lady”, he added.“We also robbed men too. I participated in the robbery of about three men at the charity Bus Stop. In all the instances, John took a commanding lead, seizing the victims and dragging them into the bush where we either rape or took their valuables,” he noted.According to Saviour Daniel said,
“I didn’t partake in all the raping. I was only involved on three occasions. John was the one who dragged them into the bush and undressed them. He took the lead and ordered us to take turns…. He is our leader. He is stronger than us and he instructed us to have sex with them. Whenever, he is exhausted, he ordered us to take our turn. I go after him. It is the youngest of us, Olayemi that came last. At times, they distanced themselves whenever we were taking turns."Compelled by the revelations of his colleagues, Sunday John explained
“In the last two weeks, we had robbed and dragged nine women between the ages of 27 years to 57 years into bush and raped them…. We took turns to rape them. While our primary aim was to steal their valuables, I have been having raping most of them after robbing them. It is true that it has been my idea but we have all been doing it together,” he revealed.“After robbing the ladies, I dragged them into the nearby bush. If they are younger ladies, I carry her into the bush. Like, about 24 year old lady I carried into the bush two weeks ago…. After taking our turns on her, they (colleagues) all ran away. They took all she had on her. When they were gone, all her dress was all messed up. I took her to where she cleaned up…. She couldn’t even find her shoes. I got new set of slippers for her before I gave her N500 transport money and to where she boarded a bus to Iyana Ipaja," he said.“Whenever, we take a lady, we normally rape them but not all women. Most of those we raped were between 24 years to late 50s, like a mama we raped last Sunday, she was in her late 50s,” he maintained.He added,
“We are not the only gang that operate there. I know of about three other gangs that rob there. Some groups of boys come from Agbado and Agege to operate at Charity Bus Stop. They operate in the evening.RRS Decoy team, it was learnt have placed its surveillance team in Charity Bus Stop with the hope of arresting other gangs mentioned by Sunday John.

Confirming the development, the Police Public Relations Officer, Superintendent Dolapo Badmos, said that the suspects have made very useful suggestions to enable the police arrest other group members implicated in the crime.

The suspects have been transferred to SCID for further investigations.