Nigerian Army of ‘Operation Lafiya Dole’ in the north east on Friday night made a heavy breakthrough when it arrested a Caretaker Chairman of Mafa Local Government Area of Borno state, Alhaji Shettima Lawan Maina for hiding a top Boko Haram Commander (name withheld) in his house at 1000 housing estate along Maiduguri- Damaturu- Kano road. 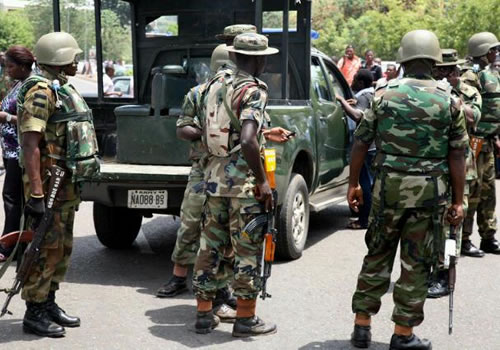 Vanguard reports that the incident, according to sources living at the same estate with the Chairman did not come to them as a surprise following the capture of Sambisa Forest, a stronghold of insurgents by troops that led to so many of the terrorists escaping to various places for safety.

A resident and neighbours of the LG boss said, the military and some security operatives stormed the house after getting an intelligence report that the top Boko Haram commander had sneaked into the
house for safety.

Already the source said, both the top Boko Haram Commander and the Chairman have been detained in a military facility to enable thorough investigation as to how a wanted terrorist will sneak into the house of the Chairman, knowing fully well, that politicians of such caliber do not usually allow access to their house of abode.

When contacted for confirmation, the Police Public Relations Officer, Victor Isuku’s phone lines were not reachable, but a top security officer who is not authorized to talk to the press confirmed the incident, stating that
“The arrest and capture of the Caretaker Chairman and the wanted boko haram commander took place on Friday night following a tip off”.